Is Technical Analysis a Suitable Tool for Bitcoin? Technical Analysis is a method for analyzing price through the study of historical data primarily focusing on price and volume specific to the market. Contrary to fundamental analysis, technical analysis is purely quantitative and does not account for a company’s intrinsic value. It utilizes previous prices and trading action to identify patterns within the price and then predict its behavior based on historical outcomes.

While Bitcoin trading platforms are relatively new, a hybrid between bitcoin enthusiasts and day traders has been born. With this said, investing techniques used by day traders are starting to emerge within the Bitcoin community and Bitcoin technology is becoming talking point in stock exchanges such as NYSE and Nasdaq. Although each investor employs a different strategy, the focus is on technical analysis. This article will act as a framework for investigating whether or not technical analysis should be used to forecast Bitcoin’s price.  In conducting this investigation, we will compare Bitcoin’s performance to the three assumptions that technical analysis needs to satisfy in accurately predicting future price patterns.

Historical disasters like Mt. Gox had unrepeatable repercussions to Bitcoin’s health due to Bitcoin’s infancy at the time of the event. However, different short-term events can lead to similar results in Bitcoin price fluctuation. News and price shifts are not mutually exclusive, but usually quite the contrary. 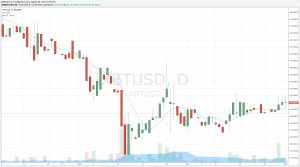 This is the price chart from the beginning of 2015 (December to March) provided by Kraken. As seen above, towards the end of December or the beginning of January, negative news clouded the Bitcoin community, causing the price to dip well below the moving average (MA) and hit a historical low of $173 with elevated volume.  This downtrend can partially be attributed to malicious news, such as Bitstamp losing $5 million worth of bitcoins to hackers. 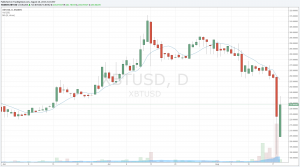 This is the price chart from the beginning of June 2015 to the present. Starting in the beginning of August, Bitcoin’s price has been below the MA, taking a huge hit in the past couple days. News of the Bitcoin XT fork has affected community on a timeline similar to the downward trend explained above.

Although these comparisons should be taken with a grain of salt, its merely a demonstration of the similarities between Bitcoin’s historical performance and its current behavior. (Note: Bitcoin’s long-term price will not mimic historical values due to the volume differential from the steadily increasing adoption of Bitcoins.)

Technical analysts support the idea that price moves in a trend. In other words, the price is more likely to go up in the uptrend and down in a downtrend.  Despite Bitcoin’s extreme volatility, its price can be broken down into the three types of trends: uptrend, downtrend, and sideways. 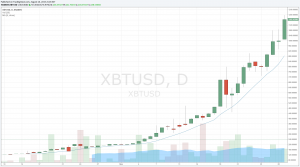 This upward trend illustrating the birth of Bitcoin can be accredited to the initial untapped bear market that Bitcoin exploited. Once word got out that Bitcoin was doubling and tripling in value, its momentum grew exponentially, like a snowball rolling down a hill, until it hit an all time high of over $1100. 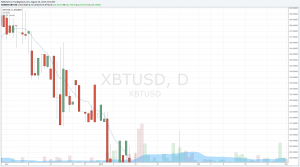 This downward trend, as seen above, is the result of Mt. Gox revealing its deficit of 850,000 bitcoins. 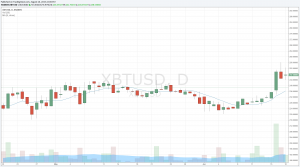 Assumption #3 The Market Discounts Everything

Technical Analysis only uses quantitative market properties. This means that advocates of technical analysis believe that everything needed to know about a market or company is incorporated within the stock or market price.

It is important not to overlook the boundary conditions for such an extensive methodology in analyzing financial behavior. These assumptions protect the accuracy of technical analysis. Without the right application, it is merely a broken clock on the wall. However, Bitcoin is in agreement with all three of the assumptions making it safe to say that technical analysis can be employed on cryptocurrency.

What do you think about technical analysis? Let us know in the comments below!

The opinions expressed in this article do not necessarily reflect those of Bitcoin.com.

Steven deCsesznak is a student at California Polytechnic State University majoring in Mechanical Engineering coupled with a minor in finance and an emphasis in Game Theory. He is a bitcoin enthusiast and uses his technical knowledge in Engineering to give an alternative perspective on Bitcoin. Transaction fees on the Ethereum network are dropping again after average fees saw a brief spike on April 5 jumping to $43 per transfer. 12 days later, average ether fees are close to dropping below $10 per transaction and median-sized … read more.